Until I was diagnosed with ADHD at age 35, I kinda just thought I was a walking set of character flaws. I felt completely inept at the things other adults seem to do with ease, including but not limited to: organization, paperwork, or having a “real job,” as well as getting anything in the mail, dinner on the table, or myself out of the house on time.

In hindsight, my ADHD was so obvious all along. But even though I didn’t know what to call it, my brain was all I knew, so I learned to lean on an elaborate set of systems to help me function as a seemingly normal person who doesn’t lose her keys 13 times a day (now it only happens, like, three times a day). Most people use tools to stay on track, but I use a lot of them, and still manage to mess up pretty often. There are the standard hacks: a key rack by the door, bills on autopay so the utilities don’t get shut off, email and pop-up reminders for everything on my calendar… and then more more extreme ones, like setting a timer for myself when I do the dishes so it doesn’t spiral into me hanging a new kitchen shelf or deep cleaning the stove for three hours.

For most of my life, I attributed these quirks to being “a creative.” After all, there were some fun aspects, too. I said yes to every exciting project (even though I rarely had time to do my work-work and took six years to finish college), lived in 10 different apartments in my twenties, and would often change my hair color based on my mood. It wasn’t all bad (depending who you asked).

Then, when I was 30, I married a wonderful, patient man who appreciated my, er, creative nature, but I found the first year of marriage incredibly stressful. I had just committed my life to someone who (rightfully) wanted to know my plan for the month, the week, the evening. But there rarely was a plan — except when there were plans, and I often mixed up dates and double booked or missed out on something completely, leaving my husband to attend a family dinner or work event without me.

At some point during that first year of supposed marital bliss, I came across an article in The Atlantic about how ADHD is different for women. It turns out that many women aren’t diagnosed until their 30s when the challenges of work and/ or marriage and/ or motherhood become too stressful. It felt so familiar, perhaps even spot on. But over the years, I had convinced myself that I just needed to try harder (thanks in part to low self esteem and chidings from a handful of authority figures). So instead of feeling relieved, I remember thinking that I probably didn’t actually have ADHD — that would be too easy — and what I really needed to do was focus more, sleep more, exercise more, eat better, set more calendar reminders, manage my time better, etc. So I tried, and failed, and tried and failed, over and over again.

A few years later, when I got pregnant, I was determined to not be a mess of a parent and I shifted every single one of my energies toward preparing for the baby. I was hyper-focused on being a good mom, an organized mom, a mom who had her (kid’s) shit together. I researched, I planned, I read. I obsessed.

And it worked! For a while, anyway. I’d never had any structure in my life, but I managed to create it for my son with a strict sleep schedule and regular mealtimes. I even made all of Teddy’s food from scratch and kept up with washing and putting away his laundry.

But when I agreed to take yet another (ultimately short-lived) full-time job and had to get myself and a toddler out the door on time with lunches and bags and clean-enough clothes, it felt impossible. And it was. I mean, we always eventually made it out the door. Just never on time. But wasn’t this just the reality of being a working mom?

One evening, my husband asked if I could maybe make dinner for us literally only once a month — and I broke down. “I don’t understand how women have kids and jobs and ever cook or clean or do anything ever at all!,” I sobbed. And, then, as always, I put nose to the grindstone and I tried. I set more reminders, made more lists, and even focused on cooking once a week (for a few weeks, anyway).

Then, one week, all of my systems failed me.

Our fifth wedding anniversary was coming up and my husband had gotten us two nights in a treehouse in the forest. I had plenty of time to plan, so in an uncharacteristic move, I’d spent the previous week working ahead so I could relax and really be present on the trip. In fact, I was so on top of things, I decided I could join some mom friends for a brunch they’d been planning for weeks. On the day of, I texted the organizer to let her know I was running late, but that I was on my way (because of course I never managed to RSVP).

I was bummed, but laughed it off and used my surprise free time to continue preparing for my anniversary getaway. I confirmed dates with the dog sitter, canceled my Friday babysitter (since my son would be with his grandparents), and even popped into Target — by myself! — to get some sexy new cheap granny panties and razor blades that wouldn’t give me tetanus. And I sent my mother-in-law a text confirming preschool pickup.

I panicked for a second, then looked up the email confirmation, and then looked at the calendar. Apparently, I was trying to leave a week early. If missing brunch was funny, this was HILARIOUS… right? I texted my husband and coworkers with lots of cry-laugh emojis, rescheduled the dog sitter, rearranged some work meetings, and, as I had conditioned myself to do, rolled with the punches.

That Friday (when I originally thought I was supposed to be on my trip), the babysitter was running annoyingly late. I texted asking where she was.

I had rescheduled everything. Except the babysitter.

This time I didn’t laugh. I felt like such a failure — as an adult, as an employee, as a mom. I had a flexible job, a supportive husband, an easy kid, and in laws who were always willing to help. I was rolling in privilege. How could I still screw up everything so much, all the damn time?

In that moment, I remembered that article. The one from a few years earlier. I read it again. This time, though, my takeaway wasn’t that I needed to suck it up and try harder. I felt like I had been trying hard — SO HARD — all this time, and still failing. And that maybe there was something wrong with my brain. I burst into tears.

Along with a note about what just happened with the sitter, I sent the article to my husband. 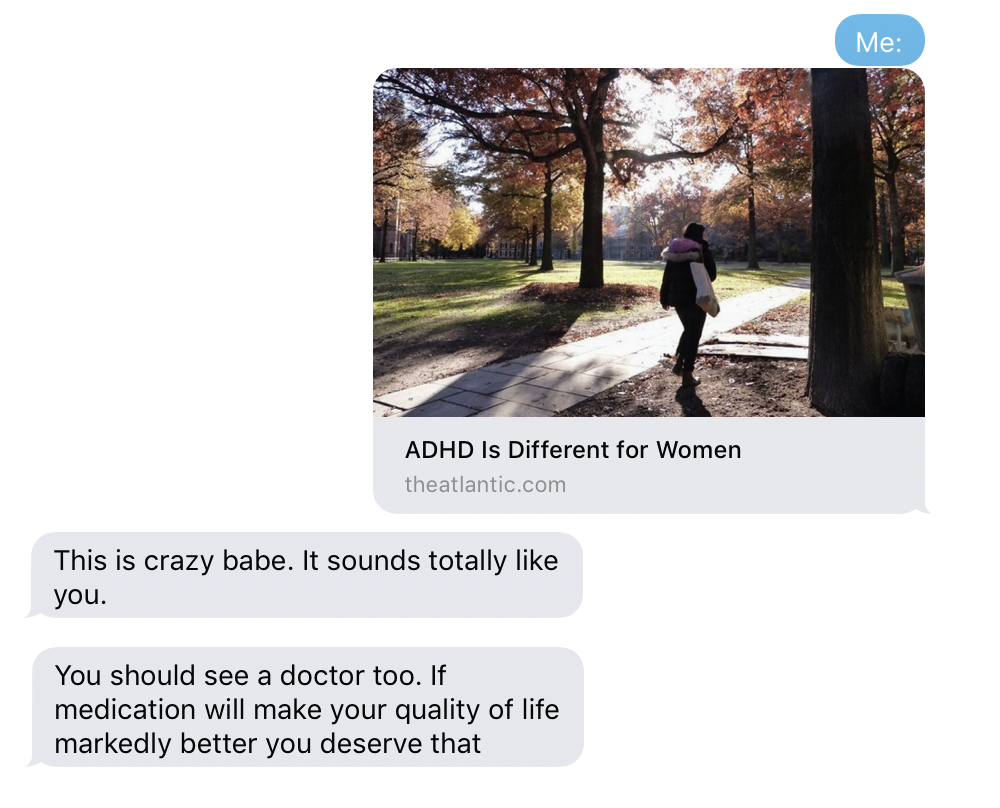 So, I saw a doctor. In fact, I saw a few before finding one I liked. I’m on meds now and in therapy, and my husband and I are in marriage counseling because marriage is hard, and it’s even harder with a kid, and even harder when one of you has ADHD.

The diagnosis has helped my husband (and myself) give me a little more grace when I forget a date or don’t follow through with something, but it’s not an excuse. And a low-dose stimulant can often help me maintain my focus on tasks. I do still need to exercise more, and sleep more, and eat more healthfully, and I still implement all those systems that help me feel less overwhelmed (plus a few new ones). And I’m getting there.